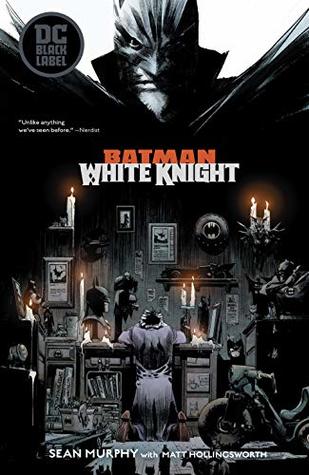 Synopsis
From visionary creator Sean Murphy (American Vampire) comes this new graphic novel featuring a radical take on the greatest rivalry in comics in Batman: White Knight!
After years of epic battles, the Dark Knight finally finds a way to cure the twisted mind of his archenemy. The Joker…is now sane. The Clown Prince of Crime has now changed his ways, fighting for good in Gotham City, and it may just cause Batman to go over the edge of his own sanity.

Writer/artist Sean Murphy takes the helm of this Batman/Joker story like no one else could, delivering an alternative examination of the relationship between the greatest rivals in the DC Universe, exploring the darkest corners of justice and madness. This new graphic novel is the latest in great stand-alone stories from DC Comics.

I haven’t read a Batman story in a quite a while, and I had a lot of fun jumping back into Gotham with this. The story isn’t perfect, there are a few plot points that are rushed and feel a little underdeveloped. But, White Knight is still a fantastic story and ton of fun. White Knight is a story that does an excellent job of giving a fresh take on the Joker and Batman dynamic, whilst also exploring what it means to be a hero, and just how thin the line between good and evil can be.

I bloody love a good Batman story, I do! When I first discovered Comixology, all those years back, I bought about 200 Batman comics. I went through a period of several months where I exclusively read Batman stories and nothing else. It was wonderful. I did try to branch out to other superhero comics, but very little else grabbed my attention (except Old Man Logan). I connected with the gritty, disturbing, atmosphere that many Batman arcs have. In addition, the Joker, is the single greatest, and most fascinating, comic book character of all time. Don’t even @ me.

After reading so many superhero comic books, I got fatigue and stopped reading them. I would still read a lot of comics/GNs, but not superhero ones. But then I came across White Knight when Lashaan at Bookidote reviewed it. My interests were piqued and I decided to jump back into Gotham with this Batman story. I highly recommend you check out Lashaan’s review. He is a fantastic reviewer and does the story more justice than I ever could. But, I shall try, like a little engine that could.

So, you know when your parents are killed and you inherit billions of dollars and become a caped crusader set on cleaning up the streets but you get a bit too focused on that and you lose your way a little but you can’t see it because you’re in so deep and then people around you keep getting hurt, or worse, and you need your semi-cured arch enemy to show you the error of your ways in a totally ironic but no less badass way? That. Relatable.

White Knight is, on the surface, a Batman story, but I found myself digesting it as more of a Joker/Jack Napier story. You see, the Joker is a despicable character. He is a person that has done some horrendous things. But he is the result of a fractured mind. Just beneath the surface is the man that existed before the Joker, Jack Napier. Jack is much more caring and compassionate. And that was the hook for me. The Killing Joke, in my humble opinion, is the greatest Batman story. It tells of how Jack Napier became the Joker. White Knight, turns that story on it’s head but explores similar themes of characters struggling with the light and dark that exists within themselves.

Batman and the Joker are so interlinked with each other. It’s often explored in Batman stories how one cannot exist without the other. They are the yin and yang of the DC universe. White Knight continues that tradition whilst giving us a fresh story.

The pacing of the plot is wonderful. There’s enough action and ridiculous high energy scenes that go on for many pages. The quieter moments of the story do a great job of building tension and pushing the story forward. The artwork is supremely good. There is a lot of detail in some panels, and a lot of hidden easter eggs throughout. I had a good time spotting little nods to past stories.

The book isn’t perfect though. It does fall into the trap of containing some of the more ridiculous comic book tropes. Joker’s cure is a little too convenient – it’s like suddenly there are these pills that come out of nowhere and work almost instantly. Also the darker side to Bruce was rushed and could have been explored more. I would have really liked to see more instances of Bruce losing his way. The main driving points of the plot just felt a little contrived. I had to actively suspend my disbelief several times. Also, two Harley Quinns? Hmmm.

But, I still had a lot of fun falling back into the Batman universe. Although this isn’t a 5 star book for me, I did have a 5 star experience reading it. Does that make sense?! I really enjoyed being back in Gotham, and seeing all the villains back out, causing mayhem. Plus the little glimpses of the Joker here and there was like icing on the cake.

Overall, this is a solid Batman story. Although not the best, it is up there as a great. It’s got a lot of action, a lot of subtle storytelling, and the absurdity expected from a mainstream superhero comic. White Knight is a story that does an excellent job of exploring what it means to be a hero, and just how thin the line between good and evil can be.

Comixology are currently having a huge sale on Batman stories – most of them at just £2.99 each. If you haven’t read any Batman before and are interested in trying some, now is the time. The Killing Joke is a Joker heavy story, and one of my favourites. But if you want something more Batman heavy, then I would recommend The Court of Owls, Hush, or The Black Mirror.

Anyway, I’m off to dig out my collection of Batmobiles from the past. Until next time, Peace and Love!