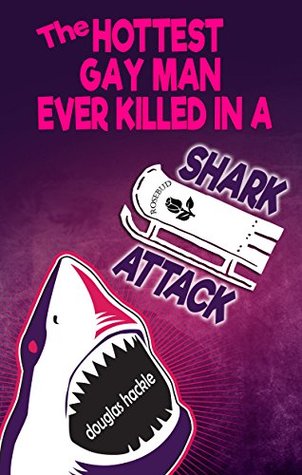 Synopsis
Ever since he was a young orphan, Hansel Higginzshire’s dream has been to break the long-held Guinness World Record for hottest gay man ever killed in a shark attack.

Big Problem #1: Hansel is not hot. At least not in the classical sense. In fact, the deformed man has a head the size of a wrecking ball.

Still, that shouldn’t stop a big-headed mofo from dreaming big, no??

But if those obstacles weren’t enough to impede Hansel’s path to Guinness World Record greatness, he finds himself wanted for murder. Now on the lam, his situation pretty hopeless, Hansel agrees to die a horrible death in a snuff film for just few measly bucks.

But perhaps the misfit companions Hansel meets on his westward cross-country trek to Hollywood—Rosebud (the drunken, down-on-its-luck, former actor, and sentient sled from Citizen Kane); a living, talking amputated arm that once belonged to a famous rock drummer; and a geeky keytar player born with a small polar bear head instead of a human head—can convince Hansel to follow his dreams again and attempt to become . . .

THE HOTTEST GAY MAN EVER KILLED IN A SHARK ATTACK!!!

Things this book includes:
– Clown tattoos
– Multiple head deforming conditions
– Rosebud. The actual sentient sled from the greatest ever, soon to be worst ever, movie, Citizen Kane.
– The severed left arm of Def Leppard drummer, Rick Allen
– Physical mathematical abstractions.
– My mama. Which was a wee surprise. Your mama is in it too, sister/brother. Which is totally not weird!

There is no way of giving this a coherent, structured, review. It’s batshit crazy, right from page one through to page 174. It’s a roadtrip of chaos and nonsense full of events that take place for the sake of simply sure yeah, why not?!

Bizarrely, whilst reading this, I thought about Alice’s Adventures in Wonderland. The Hottest Gay Man Ever Killed in a Shark Attack has a similar structure, in that each chapter contains a crazy mini-adventure or weird character, with the story only just held together by a thin plot.

The humour is great to start with but gets old quickly. Some jokes are run into the ground and just become irritating, and some are funny, but then explained. Nothing causes a joke to lose it’s humour more than explaining it. A little more subtlety would have made this even funnier. Thankfully the story is not super long so I was able to stick with it, but I did laugh less towards the end. There’s a bunch of silly cartoon like slapstick sequences which made me lol. I half expected someone to pull out an ACME stick of dynamite in parts. And then there are scenes that, although funny, felt like they were not necessary for the story.

The characters are fantastic – every one of them! Even that drunk bigot, Rosebud. We’ve all got an uncle like Rosebud. Some characters are a little cliche but in a completely intentional manner. There’s some really good use of social commentary satire. Some of it is subtle, some of it… less so. Still, I liked what the story was saying.

The ending is wonderful! The story comes together nicely and the bizarre elements are really cranked up to 11. It’s an absurd ending, and it’s exactly what I wanted from a story like this.

Overall, this was a lot of fun, and easy to read, but didn’t blow me away. A good stop on my my recent exploration of bizarro fiction.

Anyway, I’m off to buy a made in Haiti electric guitar. To motherfuckin’ Tobin. Until next time, Peace and Love!