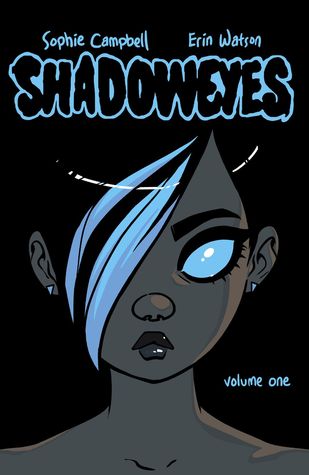 Synopsis
Moody teenager Scout Montana is an aspiring vigilante, but her first fight ends with her knocked unconscious. When she awakens, she discovers that she’s able to transform into a superhuman creature, and she becomes the superhero Shadoweyes. However, Scout soon finds she’s unable to return to her human form.

Scout’s new life is just getting started, and it won’t be easy.

I was gem hunting in comixology submit and very glad I came across this. It’s a fun, original take on the superhero story, but manages to sensitively deal with some heavy subjects. Set in a dystopian future of low income, low resources, and high crime. (They have dial-up internet! THE HORROR!) Unfortunately, it’s not perfect. The worldbuilding is lacking, and the plot needs some work to make it structured and to flow better. The characters are fantastic, I bloody loved them all, especially Sparkle! And as icing on the cake, there is a wide range of fantastic diversity rep. Spot the white cis male – you can’t!

I like to go gem hunting with self-published books. This was a little more expensive than I would normally pay but I figured I would take the risk, because I sure do love living dangerously. That’s right, I’m such a bad ass that I spent £14 on a book! Oh, how the other half live. And I am so glad I did, because this, is a diamond in the rough! But it isn’t flawless.

Although this is a superhero story at its base, it’s not necessarily about superheroing. That’s a word now, go with it! We get a very quick origin story, which was nice and refreshing, and we do get some superheroing, but it felt secondary in the overall story. Instead, this is a story about characters, and individuals, and the intricacy of the relationships between them. It’s a YA coming of age story, of sorts.

The story is slow, and it does drag in sections. For instance, we get several pages of Shadoweyes and Sparkle playing a card game, but then there are times when meaningful and important conversations and events are rushed over. This left me feeling like the overall pacing was a little fractured. The dynamic of the story is off.

The worldbuilding is a little watered down. The story is set in a dystopian future where water is rationed and the city is almost exclusively run down concrete and rusted iron areas in desperate need of some regeneration. Crime is high, obvs, but it’s committed by mindless gangs of thugs and we never got to see any supreme ‘bad guy’. I am conflicted in whether I liked this or not. It felt like something was missing, but it’s also what kept the story so original. I know, I know – I am the ‘some people’ you just can’t please sometimes.

There is a brief romance that happens and it felt unnecessary to me. It was a bit of a contrived way to introduce tension and drama into the story between two characters. There was already enough motivation for conflict between them that the romance wasn’t necessary. It started to feel a little like a ‘teenage drama’ story at this point. It just didn’t work for me.

The characters are really defined throughout. They are complex and intriguing. Shadoweyes is a grey character, not just with her superhero duties, but with her life choices. For example, she’s vegan (out of a moral duty to living creatures), and kind to people, but she uses people and friendships, which she drops when she has no use for them. She’s a fickle person. She’s a little immature and doesn’t always think things through. This was frustrating at times, because I wanted to get fully invested in her (she is the protag), but it did also keep her feeling like a real person.

Speaking of realistic, the dialogue is some of the best I’ve ever read. Some characters are not very articulate, and I love that. It got me thinking about how quite often in books, characters speak clearly and with structure and form and that just ain’t how everyone speaks in real life. I really appreciated how each character in this spoke in a rather unique way and had little quirks or words/phrases only they would use. There’s an excellent scene where a character is frustrated with Shadoweyes and wants to express this, but doesn’t know how to articulate her thoughts, so she ends up just saying, ‘It’s like… I dunno!’ which felt very real.

There is some excellent diversity rep through this. And it’s not just your average gender, sexuality, race reps either. We get some lesser used representation, such as biological sex (there is an intersex character), autism, disfigurement, and terminal illnesses. On the whole, I really liked that, but it did feel a little like Campbell was trying to cram in a little too much. Sophie Campbell is a transgender woman, which I didn’t know when I starting reading this (I learned this when I googled her after finishing the book).

This story does deal with some very heavy subject and some people might need a Trigger Warning or two. It deals with terminal illness, abusive parents, drug addiction, and domestic abuse. But Campbell deals with them in a sensitive manner, and they are never there for shock value. They always play a part in character motivations.

OH MY GODS I LOVE SPARKLE SO MUCH! Best. Sidekick. Ever. She is so pure and adorable! Just look at her! She’s a physical embodiment of the phrase Bitter Sweet.

Unfortunately, the ending is very abrupt and leaves us on several cliffhangers. I felt really let down by this. It felt like Campbell got bored with the project, and from what I can figure out, she has moved on from it. It’s a shame, because it’s very good.

Overall, I really did enjoy this. It’s a relatively long GN, and dialogue heavy, but it never became a problem for me, because it was a lot of fun. Every character is interesting and held my attention just fine. Although the plot lacks substance and the ending is disappointing, I still had a blast reading it and was well worth the money. I just want more!

Anyway, I’m off to cut belly holes in my shirts. Until next time, Peace and Love!