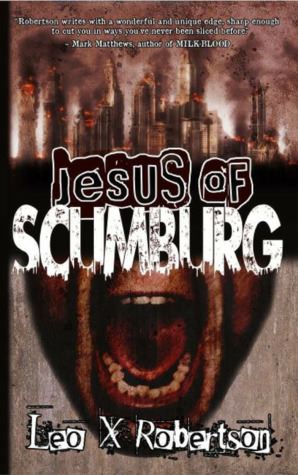 Synopsis
Jesus DeJesus is the lead singer of the Nazi Sympathizers, a punk band whose music excites its audiences into a frenzy that results in the complete annihilation of whatever city the band plays in. When Jesus is reunited with his high school crush at a gig in his home city of Scumburg, his disorder-centric way of life is soon thrown into question, making him wonder if there might be a better life in store for him. Jesus DeJesus’ story is an exploration of the ever tempting urge towards total distruction.

I received a copy of this from the author, Leo X. Robertson. My thanks to the Leo for this opportunity. All quotes used in this review were taken from an eARC and are subject to change in the final version. These are my honest thoughts of the book.

This is so much fun. It’s chaotic and unpredictable. Shocking in all the right ways. A wonderful exploration of expectations, self destruction and narcissism. This ain’t a gentle read walk in the park kinda read. It contains a lot of heavy, over the top, difficult, subjects but presented with hilarious, witty, sarcastic, writing.

You should deffo buy this on Xmas day and enjoy a lovely story about Jesus.

Look, it’s difficult to list my likes and dislikes of this because my dislikes became likes and my likes are things that should really be dislikes. Alles klar? Gut.

Overall Thoughts
Blasphemy! Blasphemy I say! ‘Tis wonderful. I like this a lot. It’s very clever. For a relatively short novella, it says a lot. I’ll be honest – I was not completely ready for it. This is 100% batshit crazy and a shit ton of fun!

Jesus DeJesus is a cult leader without a cult… sort of. (Fun fact; a character in the book annoyingly says something very similar. It’s annoying because I wrote that sentence before I got to that part in the book! I am a smart, astute, cookie with my own original thoughts – I promise!) Ok, so maybe he isn’t a cult leader, he’s the frontman of a punk band who is revered as maybe a second coming kind of figure that has the ability to incite riots and turn the town to some post-apocalyptic misery just with his presence. Oh, he also has swathes of followers and admirers that bend to his every command. A bit like a cult leader, right?!

Jesus is a deplorable character, and I really didn’t like him. But I wasn’t supposed to like him, and because I knew this, I started to like him, by not liking him harder. He is completely self destructive and for 72 pages we go along with his chaotic self destructive lifestyle. I was rooting for him to self destruct. But I was never completely comfortable enough to know whether what was happening was actually happening or was just a reflection on his perception of the world around him. I very quickly entered a state of cognitive dissonance with this, and as such, my ’review’ (bleurgh, I hate that word) is a little less structured than usual.

Normally I would talk about the plot, supporting characters, pacing, mood, themes etc but fuck me figuratively if I’ve got any chance of putting any order to anything that happens in this. So, instead I’m just gonna ramble about stuff and try to explain why I loved it, and had such a blast reading it.

There is a lot of very explicit sexual activity in this. I know, you’d think that would bother me, right? Wrong. Stop calling me fickle and a contrary Mary! You see, I do dislike watching/reading sexy things. It’s just yak. But this is a story about fucking punks. Do you see what I did there?! I made a funny. It’s what I like to call, a knee-slapper! The whole book is set in a dirty, grimy, disgusting world full of dirty, grimy, disgusting people doing dirty, grimy, disgusting things. So it fits! My issue with the sexy times in books/movies/tv shows etc, tends to be when the sexy times are not necessary for the story. Here, the yakky sexy times are necessary because they help build the world, develop the characters, and keep the right mood.

Because to exist meant making copies and copies of your own DNA with less and less accuracy with time, to lose the spring in your skin, to inhale a poisonous gas that both allowed you your next breath and exploded you from the inside at an insidiously slow pace. To exist was to give way to entropy. To live, in no uncertain terms, was to die.

Because this is a full on punk story, it doesn’t stop at yakky sex. As it shouldn’t. It also contains pretty much every taboo ever. But this ain’t just a story of yakky sex, incest, child abuse, domestic abuse, exploitation, senseless violence, drug use, cannibalism, and worst of all – profanity. It’s a smart book, innit. Clearly written by a smart fella. If I was a pretentious fella, I would try to analyse my personal interpretations of the not so subtle reflections on real life society explored throughout this in order to explain why it’s smart.

Robertson uses dark, comical satire, to explore some not so subtle reflections on real life society. Children will blindly follow the orders of their parents, even when those orders have catastrophic consequences. Anything to please their authoritarian creators. A parent’s disappointment is a fate worse than death. Those same children will grow up to become adults demanding blind obedience from those they view as lower class citizens, and offer the same blind obedience to a higher power. Those that wish to rebel against the establishment, become punks and stop towing the line by towing another line but selectively continue to live off the luxuries the old line affords them. They play the part and fulfil stereotypical expectations. When people become revered to a certain level, they can say whatever they want, and make up ridiculous fictional backstories where revision is history, and people will believe it, because that’s what it means to have faith. These normally ridiculous stories must be true about that person because that’s what makes them the chosen one. Almost definitely exactly like a cult leader. And who is the most successful cult leader of them all?! Hey, I ain’t sayin’ nuffin! I’m just asking the question.

I don’t want my pretentious ways to give the impression that this is a serious, or dull, story. It’s really very funny. Actually, it’s fucking hilarious in parts. I legit lol’d out loud several times. It’s my kind of humour. Dark, dry, sarcastic, and most importantly, very inappropriate in parts.

Earl walked along the sidewalk, in the same clothes he wore even now: rounded sunglasses, a denim waistcoat, shorts and boots. He couldn’t grow the Hitler moustache yet, so he penned it on with a Sharpie. Jesus would later tell this to everyone proudly, as evidence that his brother was a visionary even at a young age.

I found that I got a lot of enjoyment from this book because I, somewhat ironically, submitted myself to it. I had many ‘Oh, ok, well, I guess this is happening now’ moments and just going with the flow helped me to have fun with it. It was fun to just indulge in the chaos of the story and embrace the knowledge that I could not know what was going to happen next. It was escapism at its best. I think it would have been even more fun if I had dropped acid beforehand, but I would never encourage such a thing because I am a sensible lad I am. This book packs a punch and is obnoxiously loud and offensive. It pokes fun at those trying too hard and those not trying hard enough. If you are easily offended, religious (particularly Christian), homophobic, or prudish in any way, you should definitely read this because it’s funny when people get outraged at ridiculous things. What can I say, I guess I’m just a punk at heart.

Anyway, I’m off to pay my phone bill, file my tax returns and register to vote. Until next time, Peace and Love!