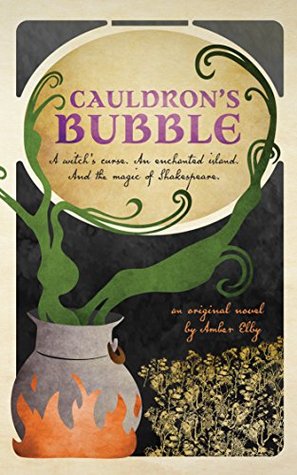 Synopsis
A magical bubble transports Alda through time and place to a realm of witches and curses, pirates and princes, and the lost worlds of Shakespeare. She, along with a cabin boy called Dreng, must navigate the conflicts and characters of Macbeth, Hamlet, and The Tempest. But will they escape with their lives? Or will they become lost and forgotten?

I would not consider myself to be much of a Shakespeare guy. In fact, I’ve been known to be somewhat very critical of his stories. I, like most people, was introduced to Shakespeare in high school. We studied Macbeth and Romeo and Juliet. I didn’t mind Macbeth, and I thoroughly disliked R+J. So much so, that I wrote a 7000 word essay on why I didn’t like it and why I hated having to study it. It was my first ever book review. I got an A for it. True story. Once I left school, I read/saw The Tempest and loved it. I’ve tried to watch and read other Shakespeare plays but really struggled to get into them and ended up DNFing most. So why would I pick up this book? Well, even though I don’t always enjoy Shakespeare’s stories, I do often find the characters interesting and so when I came across this on Goodreads I was intrigued by the synopsis. I was a tad concerned going into this that I wouldn’t enjoy it if it was too Shakespearean, but I’m happy to say that I had nothing to worry about. It’s a great little story.

Alda, is not a witch. Don’t call her a witch. Stop calling her a witch! She might be a witch; sometimes it is difficult to tell. After the loss of her Grandmother, Alda meets three witches. You may know them from such stories as Macbeth… and… others. These witches send Alda on a number of quests. Using the Cauldron’s Bubble, she travels through space and time doing things until she finds herself stuck on Prospero’s Caliban’s island. #CalibanForPres2020 Will Alda overcome the evil things she meets on the island? Will she ever find true love? Will she ever find a way to escape? Who is this mysterious Dreng that she has had flash encounters with on a boat? Well, read the book and you’ll find out.

I found this to be an easy and enjoyable read. It didn’t feel too heavy or taxing, which is good, it’s what I needed at the time. The plot is clear and has a few turns to keep it feeling fresh. The ending was a little rushed for me and I would have liked the story to be a little longer. But I was invested throughout and was interested to see where the story was going.

Alda thought back to the moor that she had so recently left. Recently? Time was no longer linear. After the witches made her sleep, they told her what to seek: a familiar called Ariel. Then they made her drink the potion. And then she traveled here.

The space and time travel aspect was interesting. The Cauldron’s Bubble is what allows Alda to travel about, and the magic is limited. I think time travel is overdone in fantasy and is often stale, but this felt logical and works with the story overall. Whilst Alda travels, she sometimes visits Netherfeld, but doesn’t remember the time there. Time passes for her though, because she is visibly older when she arrives at a new place. I desperately want to know what happens with Alda when she is in Netherfeld.

The characters are great. A little undeveloped in areas, but not so much that I couldn’t get invested in them. Alda is not perfect, and she is very much making things up as she goes along in a rather reactive way. I really liked this. Dreng and his insta-love for Miranda annoyed me and had me hardcore eye rolling throughout, but it all made sense by the end. So if insta-love annoys you too, stick with it. Caliban has fascinated me as a character since the first time I saw him in The Tempest. He remains one of the most captivating and interesting characters ever. Elby does an amazing job of expanding on his character yet staying true to who he is. I also have a bit of a soft spot in my heart for Ariel, so it was nice to see him too.

I’m sure there are a million Shakespeare references that I missed in this. But I got some of them. Shakespeare is so entrenched in our everyday language that it would be difficult to meet someone that doesn’t know at least a few Shakespeare lines. Even though I’m sure I missed a bunch, I didn’t feel like I was missing anything in the story. Nothing felt forced with the dialogue and everything was used to help move the story along. Elby’s writing is high quality and her descriptions are marvellous.

“There is nothing that is either good or bad. Our thinking makes it so. The world is never simple or straightforward.”

Overall, I really enjoyed this. More than I thought I would. For those who are not all that in to Shakespeare, this works as a fun, fast paced story full of magic, tension and twists. Sometimes it felt a little too fast paced. I enjoy a slower burn, but that’s purely a personal preference thing. For those who are in to Shakespeare, well it’s all of the above and full of little nods (and sometimes massive winks) to the stories you probably love. I look forward to book 2 of the trilogy.

Anyway, I’m off to put a stone in my sock. Until next time, Peace and Love.

ALL OF THE LINKS
Goodreads | Kindle highlights | Amazon UK | Amazon US