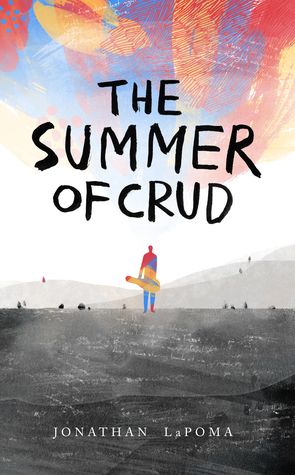 Synopsis
The summer after graduating from college, 22-year-old Danny Wolinski takes a cross-country US road trip with his friend, Ian Perez, hoping to find the inspiration to reach his songwriting potential, start a band, and avoid student teaching in the fall.

Danny is tormented by intense physical and psychological pain and sees music as his only relief, but the more he searches for this inspiration in an America filled with endless parties, heavy drugs, and lost souls, the more he questions whether it exists.

A deeply disturbing and psychological coming-of-age novel, THE SUMMER OF CRUD explores the complexities of friendships, masculinity, sex, mental illness, and addiction, and shows how the quest to unlock one’s creativity can both inspire and destroy a person.

I first came across this book when I saw a couple of friends reading it on Goodreads. I’ve read a number of YA fantasy books recently and was looking for a contemporary to cleanse the palette. The synopsis of this sounded like my sort of thing. I’ve been a young lad, travelling across a country with little else other than a guitar and a friend. I thought I would like this. Then I read Liz’s review over on Cover to Cover and thought maybe not. But then I saw on GR that it is getting a bit of a love or hate response and Liz said she wanted to know my thoughts. With it being such a short book I thought, ‘Ya know what, give it a read and see for yourself.’ Now, let me tell you about my morning… (just go along with me on this)

I woke at 6:30am as was the usual for me. I turned to my bedside table and grabbed a fresh bottle of water. I drank the lot in one go. Nothing irritates me more than that morning dehydration. I dragged my lifeless body into my en suite bathroom. Shit, pissed and showered. I brushed my teeth and stared at my lifeless dead eyes in the mirror. Sometimes I will look into the mirror for minutes at a time, wondering if there is really anything looking back. The eczema across my eyes and cheeks was coming back. I applied some E45 cream and headed back into my bedroom. I put on some fresh clothes. Unironed. It was Sunday after all and I didn’t need to wear ironed clothes. I wanted to wash my bed sheets but I’d do that later. I headed down the stairs and into the kitchen. The rest of the family had gone out and I was glad about this. Sometimes I find it difficult to engage with people. They drain me of my energy. This morning I needed to be alone for a while. I had some toast and porridge, washed down with some Orange and Mango juice. Then I went into my office and painted the nails on my left hand only. This was something I had recently started doing to challenge the gender norm expectations of some people. I’m so deep and emotional like that you see. Actually I’m not and I think I should just kill myself now and be done with it. Burn down the town and take everyone else out with me. I’d be like a real life Carrie. I asked Alexa to play Elephant by The White Stripes. Alexa abided. I sat back and listened to Jack White’s masterful guitar playing and finished a book I was almost done with. I decided to open Twitter and see what the world is up to. I sometimes think I have an obsession with twitter and want to give it up completely but if I do I would be giving up the only friendships I’ve been able to form. Online friendships seem to be my limit. I’m best known from a distance. When I die I will be forgotten about. I will die, like how Einstein and Christopher Reeve and the bird that landed in my garden that one time all died. I spent the rest of the morning finishing the book and listening to music on spotify. Then the afternoon started and I sat at my computer ready to write a review of the book I’d just read.

Do you see how my morning has absolutely nothing to do with the story here? Do you see how I have used a lot of words but I’ve actually said nothing of any worth? Do you see how I just put the odd crude or controversial thing in there to desperately try and give the impression that my story is a thought provoking emotional ride instead of just being bland and boring? Do you see how I had no payoff because I didn’t set anything up properly, and how the things that felt like they should have been setting up a payoff didn’t? Do you see how I wasted your time in telling you the story because it means nothing? Do you see how I’m just repeating myself over and over AND OVER AGAIN? Frustrating, isn’t it?! Well, that’s what The Summer of Crud is.

The Summer of Crud follows Danny on a road trip he is taking with a ‘friend’ (Ian) across the US. He brings a tent, some clothes and a guitar. He wants to spend the time finding inspiration and writing masterpiece songs. Instead, he finds himself travelling with a selfish prick (Ian) and moving from town to town visiting people and doing drugs and wasting his time and OMG I’M SO FUCKING BORED ALREADY!

Nothing happens in this. Nothing at all. This is 148 pages of a stream of consciousness from what is essentially a bit of a boring and uninteresting MC. This narrative works if there is personal growth with the MC and if the MC has something to say. Danny has nothing to say, and doesn’t really grow. He is the same person at the start and at the end of the story. I really struggled to connect with Danny. He’s a very bland, average guy with the odd emotional difficulty thrown in there. Ya know, just like the other 7.6 billion people on the planet.

I’d like to talk about the plot for a little bit. But alas, I can’t because I just can’t find one. There are so many missed opportunities in this. Chekhov’s Gun is a principal in story telling whereby if you introduce a loaded gun in act 1, it must be fired in act 2 or 3. Also, if you fire a gun in act 2 or 3, you must introduce it in act 1. Go back and think about any story you have loved and I can guarantee you that they will be full of Chekhov’s Guns. It’s a basic in storytelling. It’s storytelling 101. There are so many loaded guns introduced through this that never get fired at any point and that leaves the reader feeling deflated. It leaves us feeling like we shouldn’t get invested in anything that happens. Concepts such Ian’s bullying nature, Danny’s functional fecal retention, the characters we meet in each place, the casual drug using, Danny’s ex, the songs chosen throughout, Danny’s struggle with suicidal thoughts and his anxiety about losing his mind, even the trip itself all feel like they should be a Chekhov’s Gun. But they are not. They are just there, and they lead to nothing.

Even when Danny and Ian meet up with other people and stay in different places, nothing happens. They smoke, drink, do drugs, listen to music and pass out. Then they move on and do the same thing again and again and again and again and.. you get the point! The author tries to add conflict by having Danny and Ian argue. But instead of creating conflict, it just ended up being two stoners bickering. It becomes annoying instead of intriguing. Hey folk, you know like when one character tells another to ‘fuck off’ and it creates such excitement and interest? No? No. Of course not. Because that is not how you create excitement in a scene. It’s not how you write a dynamic story.

This is a road trip story. I wanted a three act plot of a guy who is lost and has difficulties, and then the people he meets along the way help him to come to some great realisation by the end. His experiences with people should play into the ending. The ending should be Danny developing as a person. There is no big ending here. The summer trip simply ends. Danny and Ian spend weeks travelling to California, and then at the end of the story we get 1 sentence of Danny informing us that they ‘travel back’. And then the story ends. Like, what the actual fuck?! We don’t even get the whole summer in this book called THE SUMMER of Crud. *looks around the room* Is it just me that feels short changed here?! I felt like the whole story was a waste of my time.

The Summer of Crud, in its current state very much feels like an early draft of a story. It’s short and is missing a LOT. There are little snippets of intrigue and ‘hooks’ but unfortunately the writing is just not strong enough to keep me interested. Especially when there is no payoff to anything. I know I keep saying that, but holy fuck did that irritate me! There is so much more I could say about this – I feel like I could literally go through each page and criticise what is missing and how the energy is dropping, but I am not being paid freelance editing fees, so I won’t. This was not for me. I want my stories to have a set-up, development and pay off. And this does not have any of that. This was like sucking on lemons.

In typical picky Stark ways (it’s why you love me), I have to raise this last point. This is described as a ‘… deeply disturbing and psychological coming-of-age novel.’ HOLD THE FRONT DOOR! Wow. No. Nope. Nah m8. Nein. Nee. Ei. Cha. No it isn’t. It’s not though!
1) First of all, it’s a novella, not a novel. *facepalm*
2) For something to be a coming-of-age story, the character has to develop from being naive or immature to having an enlightening experience that pushes them into the next chapter of their life. This is not what we have here.
3) There is nothing deeply disturbing or psychological about this. Just because someone thinks about shit doesn’t make it ‘psychological’. If ‘psychological’ is defined as someone thinking about the average basic shit that happens in life and worries about it then fuck me with a feather, Peppa’s First Sleepover is a deeply psychological thriller.
This false advertising of the story really pisses me off and pulled my review down from 2 stars to 1 star. I hate it when publishers/authors try to mislead us readers through their blurbs/synopsis. If the plot of your story is not strong enough to sell it, then write a better fucking story! It’s a dick move. Don’t be a dick. I tut in your general direction Jonathon/Almendro Arts. Boo hiss boo!

Liz, you owe me a good book recommendation. 🙂

Anyway, I’m off to play some Johnny Cash and cut my hair because that will be my deeply disturbing psychological character arc. Until next time, Peace and Love!