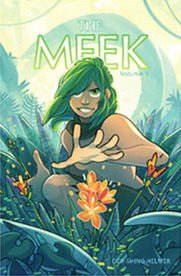 Synopsis
Angora is an inexperienced young girl who has been sent on a quest to save the world.

Since the last world war, tensions have increased between the recovering Northern Territories and the unapologetic southern lands of Caris. The world is overwhelmed with as much terror, crime, and disease as it is by those who yearn for peace. Now, a new war looms between the two countries, and mysterious, monstrous entities may be playing for much higher stakes than anyone realizes.

Armed with only her instincts and an unexplainable power, Angora must journey through this world- and perhaps decide once and for all if it is truly worth saving.

I have some unpopular thoughts on this. I did not enjoy it. But let’s remember that when someone reviews a book, they are sharing their personal opinions based on their own experience of the work. If we disagree, we can still be nice to each other. 🙂 Put the wicker man away!

The artwork throughout is good. I liked the look of the comic. The colour schemes of each geographical area are beautiful. The mix between detail and simplicity is stunning. There are some parts though where character’s facial expressions don’t really match what they are saying. This jarred me a couple of times.

On to the story itself. The synopsis and cover are highly misleading. When you read the summary, do you expect a fun story about Angora, an outcast journeying through the jungle using her wits to overcome challenging situations / bad guys and ultimately helping to prevent or end a war? I did. That’s what I expected. For the first chapter, that is kind of what you get. But, then the second chapter starts.

I was so incredibly bored reading the second chapter. After forming an attachment to Angora, and expecting her to be the protag of the story, we suddenly get jolted into a new setting with new characters. And we don’t see Angora again. This story goes from being (potentially) a fun and quirky light hearted story to just being dull and full of uninteresting characters. Our new folks are royals. I am so incredibly bored of royals/princes/lords etc in fantasy settings. I just didn’t care what was happening with them.

Then we get the third chapter and another major shift. We jump, once again, to more characters I just didn’t care about. Still no sign of Angora. And now, no sign of the royals I had just been following. Although, these new folk are slightly less uninteresting than the royals.

I completely understand that some stories spend a little time introducing characters from different settings etc and then their stories come together at some point. I assume it is the same for this story… at some point… maybe?! I was left feeling like I didn’t want to get invested in the new characters because their story will just come to an abrupt break and I won’t see them again.

There is a clear tonal difference between the chapters and I found it too much. It’s almost as though the story can’t decide what it’s ‘feel’ is. Is this a quirky, fun story, or is it a deep brooding dark fantasy? The whole thing just felt… I really don’t like to say this… amateur. It’s great to have dynamics within a story, but this was just too disjointed.

I am aware this was first published as a web comic, and I think you can still view this for free online. But I bought this from comixology. It has been published as a collected volume, and the collected volume is what I am reviewing. This is 3 introductory chapters, and therefore doesn’t work as a collected volume. It’s fine to have a larger story arc that covers several volumes of a comic, but each volume then has to have it’s own sub-story – it’s own three act plot. This just doesn’t have that. I wouldn’t be happy with the first book of a series of novels just being introductions to characters. I would expect a story contained in it. I expect the same for collected comic volumes.

There is nothing in this story that left me feeling like I wanted to shill out my money for volume 2. Do not be fooled by the marketing of this. It is not Angora’s story. Angora is in chapter 1, and that is it. Angora doesn’t even really do much in chapter 1 except run around naked.

This is published by Shingworks and I presume this is a publishing company of Der-shing Helmer (the author/artist). I feel Der-shing has purposely mislead people in the synopsis. I know that it can be really difficult to write a synopsis, I do. But I feel like I don’t want to support an author that isn’t honest with their readers.

I see on Goodreads that lots of people really enjoy this series, it has an average rating of 4.49 stars. If you enjoyed this and it is connecting with you – hooray! Genuinely. I hope you carry on reading and enjoying it. Unfortunately, there are just too many issues here for me. Therefore, as you may have guessed, I won’t be continuing with it.

ALL OF THE LINKS
Goodreads | Comixology UK