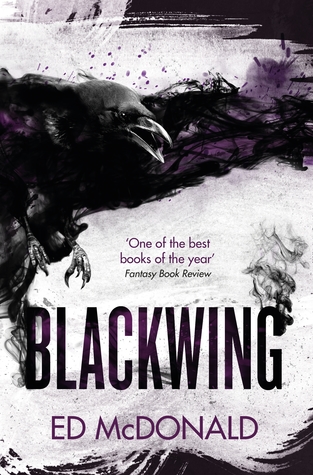 Synopsis
The republic faces annihilation, despite the vigilance of Galharrow’s Blackwings. When a raven tattoo rips itself from his arm to deliver a desperate message, Galharrow and a mysterious noblewoman must investigate a long dead sorcerer’s legacy. But there is a conspiracy within the citadel: traitors, flesh-eaters and the ghosts of the wastelands seek to destroy them, but if they cannot solve the ancient wizard’s paradox, the Deep Kings will walk the earth again, and all will be lost.

The war with the Eastern Empire ended in stalemate some eighty years ago, thanks to Nall’s ‘Engine’, a wizard-crafted weapon so powerful even the Deep Kings feared it. The strike of the Engine created the Misery – a wasteland full of ghosts and corrupted magic that now forms a No Mans Land along the frontier. But when Galharrow investigates a frontier fortress, he discovers complacency bordering on treason: then the walls are stormed, and the Engine fails to launch. Galharrow only escapes because of the preternatural magical power of the noblewoman he was supposed to be protecting. Together, they race to the capital to unmask the traitors and restore the republic’s defences. Far across the Misery a vast army is on the move, as the Empire prepares to call the republic’s bluff.

What to say? I bloody loved this, I did. It’s full of mystery, violence, magic, and a few spooks along the way.

The synopsis above does a grand ol’ job of describing the plot, so I won’t try to do better. I first saw this book on Goodreads earlier in the year when everyone seemed to be reading it. I didn’t have an ARC and so I was waiting until release day to get my hands on it. Then, as usual, I got totes distracted by other shiny books and I forgot about it. Then, I was recently looking through my tbr-owned list and thought Oh, I forgot about that book that everyone gave 5 stars and sounds awesome. Once I started, I devoured this in less than 24 hours.

Captain Ryhalt Galharrow is a hardened, battle ready bastard. I loved him. He’s a no nonsense middle aged man that is likely to give you a bop on the nose if you piss him off. I imagined him being played by Rory McCann. I also really liked Nenn – Galharrow’s right hand woman. She’s a bad ass fighting machine.

‘People are sheep,’ I said. ‘They do as you tell them. They believe what they want to, or whatever frightens them the most. If they don’t like it, they reject it or they ignore it. It’s natural. Can’t blame them for it. Can’t tell them they’re stupid either. They don’t understand that they’re sheep. How could they? The sheep don’t realise the shepherd is smarter than they are.’

The worldbuilding is excellent throughout this. I got a real sense of distinct regions, each giving their own feel. The Misery is excellent. A wasteland caused by the use of the Engine, a magical weapon akin to a major nuclear bomb, but just darker and full of magic.

There are a bunch of really freaky beings in this that just left me noping all the way. Darlings are monsters that look just like children. Except they take over your body and cause you to bleed from the eyes. NOPE! Then there’s Gillings – nasty demon-esque creatures. Their saliva contains anaesthetic, meaning they can bite you and literally eat you alive in your sleep. NOPE! I loved them.

The magic in this was great. I have a bit of a love/hate relationship to magic in fantasy. The whole wand waving and saying magical incantations doesn’t really do it for me, but when the author is clever with their magic and keeps it fresh, I can’t get enough of it. This magic was that of the latter. It sort of builds up within magicians and they can store it for larger spells. I like that.

They could feel the magic in the air, the essence of distortion. It begins as a sensation on the skin, like the dry stretch when you get sunburned. Everything a little too tight, its placement somehow wrong. Then comes the feeling in the throat, the lungs, like your body doesn’t want to breathe Misery air, and a feeling behind your eyes as though what they’re seeing isn’t quite true. There’s nothing like it in all the world that I’ve known, and for that, I thank whatever spirits might give enough fucks to listen.

The story is a single POV (Galharrow’s) written in first person narrative. I loved Galharrow’s no nonsense view of the world and what was happening around him. This style really helped to keep the story moving. The pacing throughout is great. This has lots of action balanced with enough character development that kept me interested from the first page to the last. I don’t think there was a moment that I got bored or distracted whilst reading it. Although this is a post apocalyptic fantasy full of battles and magic, it still felt fresh. This is the first in the Raven’s Mark series, and I can’t wait for the next.

Anyway, I’m off to barricade all the windows and doors to my bedroom to ensure nothing can come and eat me whilst I sleep. Peace and Love.

ALL OF THE LINKS
Blackwing – Goodreads | Amazon UK | Amazon US