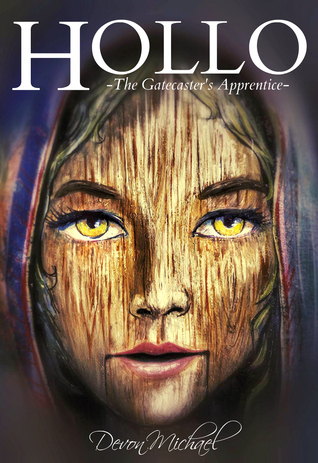 Summary
Hollo always wanted to go out and explore the city, not that she dared… but still… staying inside all the time is bad for a body, even a wooden one. And what’s the good of being able to do magic if you can’t even enchant the statues next door to keep you company? Or make the best tea you ever had? Or accidentally turn people into stone…

Hollo has always been different, but now that she’s twelve, she is about to find out that she isn’t just different, she’s one-of-a-kind. Once forced to brave the city streets alone, she finally sees magic for what it really is. The golden glow that brought her wooden body to life may be more dangerous than she could have ever imagined, and worst of all, her safe, secret house is losing its light. The clockwork men are coming for her, and soon she will have nowhere left to hide.

Ahhhh, I’m torn with this. I can’t decide whether I liked it or not!

Hollo is a fantasy story part coming of age and part fairy tale with magic thrown in for good measure. Which sounds great, right?! Like, what isn’t there to like. Hmm… well… unfortunately on this occasion it just left me feeling a bit flat.

she felt she knew nothing of the people passing by, nor understood the mechanics of their toys, their clothes, or their vehicles. Sure she knew how they worked, but you can easily know how fire works and still have not the faintest idea how to remain calm in the midst of it.

The story starts with such great promise. Hollo is a wooden-come-to-life-by-magic girl. Totally not like Pinocchio shut ya face. Her ‘father’ is a recluse and as such Hollo has been kept inside and out of sight for most of her life. On Hollo’s 12th birthday her dad takes her to the local market. Whilst out, they visit an old friend of her dad’s who works in a junk shop. This guy gives Hollo a job. But wait, this all sounds a bit too nice and rainbows and butterflies, doesn’t it? Well, things then start to go wrong. We follow Hollo on a journey to best an evil ancient group of very typical bad guys – an event that introduces her to new friends, and legendary characters and all the such you might expect from a fantasy novel.

There were lots of things that I really liked about this. Such as:
– Hollo. Hollo is just delightful. I smiled so much whenever she was in the story. Her innocent, childlike charm is wonderful. I instantly started rooting for her from the very start. She is very likeable and is an excellent hook into the story.
– The magic. I really like magic when it is done a little bit differently. Here, magic is used through strings and threads and playing cat’s cradle which causes the string to glow. Magic is not so much created, but distributed and shared.
– The fairy tales within the fairy tale. There are a couple of moments where Hollo and her friend are reading a fairy tale book, and we get to read the stories they are reading. It’s like fairy-tale-ception. It’s a little thing, but I thought it was a really nice touch.
– The setting. I don’t remember it being specifically mentioned the time period of when this is set, but I pictured it as a late victorian small city/town. There are mechanical monsters and the such so it’s difficult not to relate it to a steampunk-esque setting – although I don’t think this is explicitly stated.
– Flynn! What isn’t to like about a hardcore, saved from death, brash and brave sidekick pet cockerel?! #TeamFlynn

I’m not sure if there are things I specifically didn’t like, but I must admit that there was a lot that just left me bored, and for a 232 page book, that really ain’t good. The plot isn’t that original. Underdog good guys discovering their magical abilities whilst trying to stop a group of evil bad guys. It’s something we have seen a million times already. Hollo is the central character in the story and yet for a good portion she hides in a house and reads a book whilst supporting characters go off to progress the story further. It felt like the author had a great couple of characters, but just didn’t have a good story to put them in. Everything that happens with Kit just had me hardcore yawning. I got a about 70% through and quite frankly lost most interest in what was happening. The only characters I felt invested in were Hollo and Ali and they never really felt like they were in true danger. It did feel like some of the supporting characters could die at any moment, but you know… *shrugs shoulders* I just didn’t care about them.

I’ve seen a couple of people compare this to a Neil Gaiman story. This helped me to make the decision to give it a read. However, as much as I can see how the magic may have that feel and I can see how some of the characters may feel similar to Gaiman’s style, the quality of writing, prose and overall storytelling just isn’t on that level.

I also had a minor issue with the physiology of Hollo. OMG so salty! I may just be nit-picking here – go with me for a moment. She doesn’t eat because she is wooden. That makes perfect sense. But she does breath, and cries. Real, wet tears. If she is not eating or drinking, where is she getting those tears from I ask you?! She also heals from injuries and the such. Again, if she ain’t eating, how is this happening? I suppose magic is the answer. Also, the kindle version did have a number of typos and missing words throughout. This is a major irritation of mine that I may need to learn to let go. NEVER! It’s not like the story is unreadable by any means, but if you are going to publish your work and charge people to read it, make sure it is right. This could have done with going through the editing mill at least once more.

I feel like I’ve criticised this a lot, and I may come across as though I didn’t like it. I did like it. There were just a lot of minor irritations throughout. I suppose I just felt like it had such a great start that I expected much more throughout. Overall, this is an alright story with some great characters, some heartbreaking moments but also plenty of moments of joy and sweetness that made me smile.

“What you think you know about someone always gets in the way of knowing them better.”

Anyway, I’m now off to buy a pet cockerel. Peace and Love.