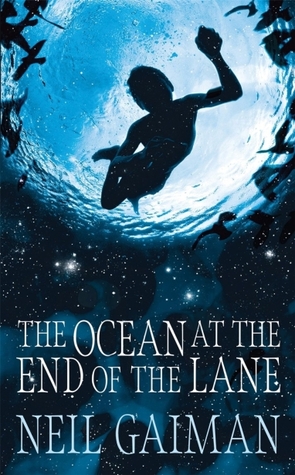 Summary
It began for our narrator forty years ago when the family lodger stole their car and committed suicide in it, stirring up ancient powers best left undisturbed. Dark creatures from beyond this world are on the loose, and it will take everything our narrator has just to stay alive: there is primal horror here, and menace unleashed – within his family and from the forces that have gathered to destroy it.

His only defence is three women, on a farm at the end of the lane. The youngest of them claims that her duckpond is an ocean. The oldest can remember the Big Bang.

Childhood memories are sometimes covered and obscured beneath the things that come later, like childhood toys forgotten at the bottom of a crammed adult closet, but they are never lost for good.

After my 985th read through, The Ocean at the End of the Lane has just become my favourite novel of all time. It has knocked Skellig off the number one spot. Sorry not sorry Skellig – I still love you, I just love another more. I love Ocean so much I want to kiss it, and hold hands with it and have babies with it and apply for a mortgage with it and holiday in the south of Wales with it and buy it birthday presents and argue over what we are having for dinner with it and share a car with it and tolerate it’s parents and cut the grass whilst it sunbathes in the garden and oh my!

Adults follow paths. Children explore. Adults are content to walk the same way, hundreds of times, or thousands; perhaps it never occurs to adults to step off the paths, to creep beneath rhododendrons, to find the spaces between fences.

During a visit to his childhood town for a family funeral, the narrator (we don’t learn his name) is drawn down a lane to an old farmhouse, which has a large lake/pond (some say ocean) next to it. Whilst sitting on a bench, he starts to remember the fantastical events that happened to him when he was 7. Things that he had remarkably forgotten. Such as when a guest staying at the family home steals his dad’s car and commits suicide in it. This event wakes a being from another dimension who tries to help people, but ends up causing bother. The narrator meets three witches who live in the farmhouse. All sounds not too bad right? WRONG! The story takes a very dark turn and wonderful, scary, insightful and excellent things happen.

Things I absolutely bloody love about this story: EVERYTHING

‘That’s the trouble with living things. Don’t last very long. Kittens one day, old cats the next. And then just memories. And the memories fade and blend and smudge together…’

Seriously though, some things I love about this:
– The Narrator. He’s such a relatable 7yr old. He loves books. He’s shy. He feels a little bit of an outsider. He appreciates little things in life (like having a small sink in his bedroom). He over thinks a lot of things. He has a great sense of fairness and appreciates kindness. He deals with very difficult, life threatening events with such courage.
– The Hempstocks. Ah, the Hempstocks. Where to start with the Hempstocks. They are positively perfect in every way. They are witches of old. A daughter, mother and grandmother (The Maiden, Mother and Crone). Old Mrs Hempstock has been around since before the big bang, and will still be around for the next one. She remembers the days before the moon was made. Their magic is somewhat grounded. They don’t cast spells, but instead craft potions, stitch time to change events and can see things happening in other parts of the world without being there. They can also make people forget things apparently. I get the feeling they are much more powerful than what they show and do in this novel and I like to think of them as immortal deities rather than witches. I desperately want more stories with the Hempstocks. (Other Hempstocks do appear in other Gaiman novels, but i want a collection of nothing but Hempstock stories.)
– The ending. I won’t say too much because, obvious spoilers, but the end is rather bittersweet and it is done gently and heartwarmingly and is full of satisfyingly pensive hope.
– The worm scene! Trust me, read the book and you will see why it is wonderful.
– The writing. I believe Neil Gaiman is the best writer of our time, and quite possibly of all time. Yes, I am a complete fanboy of Gaiman. I am in awe of his writing skill and his ability to wield words and language in such a dreamlike, poetic, fairy telling manner whist feeling modern and engrossing. I fall into his worlds so easily and always feel book drunk when I get to the end of one. Ocean has so many magical pensive moments and lines. I wanted to highlight a quote on every page, but resisted. There could literally be 900 highlights of wonderful text from this.
– The food descriptions. I get so hungry reading this. The descriptions of food are soooooo good. Just look at this example:

Dinner was wonderful. There was a joint of beef, with roast potatoes, golden-crisp on the outside and soft and white inside, buttered greens I did not recognise, although I think now that they might have been nettles, roasted carrots, blackened and sweet (I did not think that I liked cooked carrots, so nearly did not eat one, but I was brave, and I tried it, and I liked it, and was disappointed in boiled carrots for the rest of my childhood). For dessert, we had the pie, stuffed with apples and with swollen raisins and crushed nuts, all topped with a thick yellow custard, creamier and richer than anything I had ever tasted at school or at home.

Like, come on, don’t pretend you aren’t salivating over that.
– The length. This may seem like an odd thing to like, but I have short term memory problems and so long novels can be difficult for me to read. At 246 pages, this is the perfect length so I can read it in one sitting, and remember enough detail to remain fully immersed in the story and world.
– The audiobook. If you read some of my other reviews, you know I like audiobooks and switching between listening and reading. The audiobook is at a great 5hr sweet spot, and Gaiman expertly reading the story to you is a delight.

I could ramble for much longer about how much I love this story, but I think you probably get it. I have so many good things to say and nothing negative.

I went away in my head, into a book. That was where I went whenever real life was too hard or too inflexible.

I’ve had porridge with honey and cream for breakfast. I’m going to have a fresh sandwich with good bread and tomatoes that actually taste of something for lunch. And I’m going to make roasted veg for dinner tonight. Peace and Love.