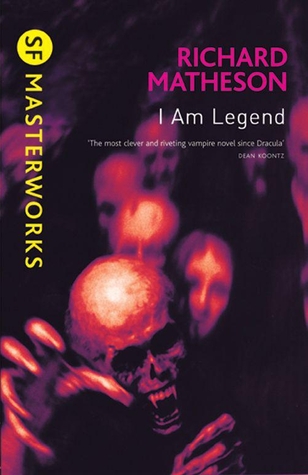 Blurb
The last man on earth is not alone…Robert Neville is the last living man on Earth…but he is not alone. Every other man, woman and child on the planet has become a vampire, and they are hungry for Neville’s blood. By day he is the hunter, stalking the undead through the ruins of civilisation. By night, he barricades himself in his home and prays for the dawn. How long can one man survive like this?

I read Jazz’s review of this yesterday and thought ’I’ve had this on my to read for a while. Come on Stark, just read the fucking thing already!’ So, because I don’t like it when my head voice tells me off, I packed a lunch and went for a long walk into the woods. I found a nice log in the sun, made myself at home and finally read this like a totally adorable little reading elf. OK, maybe not that little; I am 6’3” and 255lbs (of pure muscle, obvs.) LIES!

I had watched the Francis Lawrence movie when it first came out, and although I didn’t dislike it as much as some people, I didn’t really find it mind blowing. It was a solid meh – maybe a 2.8754623 stars out of five. I found the book to be better, but not the 5 star read that many others find it to be.

On those cloudy days, Robert Neville was never sure when sunset came, and sometimes they were in the streets before he could get back.

The story is set in a post apocalyptic world where an illness has turned the vast majority of all life into vampires, or… living deads and deads… or something… I got a little lost OK?! And not those crappy romantic vampires, but truly monstrous bite your fucking face off vampires. Robert Neville, a World War 3 veteran, is surviving in this world by mainly hiding in his barricaded home at night and by hunting and putting stakes through the heart of those he finds during the day. Robert van Helsing is, conveniently immune to the vampiric germ and the illness it causes. He’s still gotta be careful though, because it doesn’t mean these vampires won’t bite his face off given half a chance!

They were strange, the facts about them: their staying inside by day, their avoidance of garlic, their death by stake, their reputed fear of crosses, their supposed dread of mirrors.

It is difficult for me in my super modern age mind erm, have you met you? to gauge the impact it had on the genre and just how horror-esque it would have been when first released. I didn’t find it particularly horrifying at any point, but there were moments of discomfort. The whole ‘Oh my there is a female vampire outside acting in a promiscuous manner and I am a man and therefore cannot control myself and my junk is burning and twitching because I must go and fornicate with her despite knowing this is a trap that will lead to my death’ thing was just laughable. I know I’m probably not the best to judge such a thing, but come on – as if! What sort of person would have their head in the gutter when there is a vampire apocalypse happening right outside! I’d be more focused on not having my face bitten off, but maybe that’s just me?!

That aside, I still struggled a little to connect with the main character, but I find that a lot with SF from this era. Maybe it’s just not how they were written, or maybe it’s because I’m such a modern day guy. Again, no. The story and concept was good though. I found the science explanation very intriguing, I was hooked in those parts. Because I’m so busy being totally awesome at other things, I have no idea whether the science actually makes sense or not, but with a small amount of suspending disbelief it makes perfect sense in the context of the story. The ending is much, much, much, much… (we could be here a while, so I’ll skip ahead) much more satisfying than that of the movie.

Overall, this is a solid mid 1900s science fiction book and if those are your sort of thing, you will likely really enjoy this. I’m glad I finally got around to reading it, but I probably won’t read it again.

Anyway, I’m off to soundproof the house and whittle stakes for no apparent reason. (I’m not having my face bitten off.) Peace and Love!